Face recognition is a mainstream biometric authentication method. However, vulnerability to presentation attacks (a.k.a spoofing) limits its usability in unsupervised applications. Even though there are many methods available for tackling presentation attacks (PA), most of them fail to detect sophisticated attacks such as silicone masks. As the quality of presentation attack instruments improves over time, achieving reliable PA detection with visual spectra alone remains very challenging. We argue that analysis in multiple channels might help to address this issue. In this context, we propose a multi-channel Convolutional Neural Network based approach for presentation attack detection (PAD). We also introduce the new Wide Multi-Channel presentation Attack (WMCA) database for face PAD which contains a wide variety of 2D and 3D presentation attacks for both impersonation and obfuscation attacks. Data from different channels such as color, depth, near-infrared and thermal are available to advance the research in face PAD. The proposed method was compared with feature-based approaches and found to outperform the baselines achieving an ACER of 0.3% on the introduced dataset. The database and the software to reproduce the results are made available publicly.

Face recognition has evolved as a prominent biometric authentication modality. However, vulnerability to presentation attacks curtails its reliable deployment. Automatic detection of presentation attacks is essential for secure use of face recognition technology in unattended scenarios. In this work, we introduce a Convolutional Neural Network (CNN) based framework for presentation attack detection, with deep pixel-wise supervision. The framework uses only frame level information making it suitable for deployment in smart devices with minimal computational and time overhead. We demonstrate the effectiveness of the proposed approach in public datasets for both intra as well as cross-dataset experiments. The proposed approach achieves an HTER of 0% in Replay Mobile dataset and an ACER of 0.42% in Protocol-1 of OULU dataset outperforming state of the art methods.

While the performance of face recognition systems has improved significantly in the last decade, they are proved to be highly vulnerable to presentation attacks (spoofing). Most of the research in the field of face presentation attack detection (PAD), was focused on boosting the performance of the systems within a single database. Face PAD datasets are usually captured with RGB cameras, and have very limited number of both bona-fide samples and presentation attack instruments. Training face PAD systems on such data leads to poor performance, even in the closed-set scenario, especially when sophisticated attacks are involved. We explore two paths to boost the performance of the face PAD system against challenging attacks. First, by using multi-channel (RGB, Depth and NIR) data, which is still easily accessible in a number of mass production devices. Second, we develop a novel Autoencoders + MLP based face PAD algorithm. Moreover, instead of collecting more data for training of the proposed deep architecture, the domain adaptation technique is proposed, transferring the knowledge of facial appearance from RGB to multi-channel domain. We also demonstrate, that learning the features of individual facial regions, is more discriminative than the features learned from an entire face. The proposed system is tested on a very recent publicly available multi-channel PAD database with a wide variety of presentation attacks.

Iris centre localization in low-resolution visible images is a challenging problem in computer vision community due to noise, shadows, occlusions, pose variations, eye blinks, etc. This paper proposes an efficient method for determining iris centre in low-resolution images in the visible spectrum. Even low-cost consumer-grade webcams can be used for gaze tracking without any additional hardware. A two-stage algorithm is proposed for iris centre localization. The proposed method uses geometrical characteristics of the eye. In the first stage, a fast convolution based approach is used for obtaining the coarse location of iris centre (IC). The IC location is further refined in the second stage using boundary tracing and ellipse fitting. The algorithm has been evaluated in public databases like BioID, Gi4E and is found to outperform the state of the art methods. 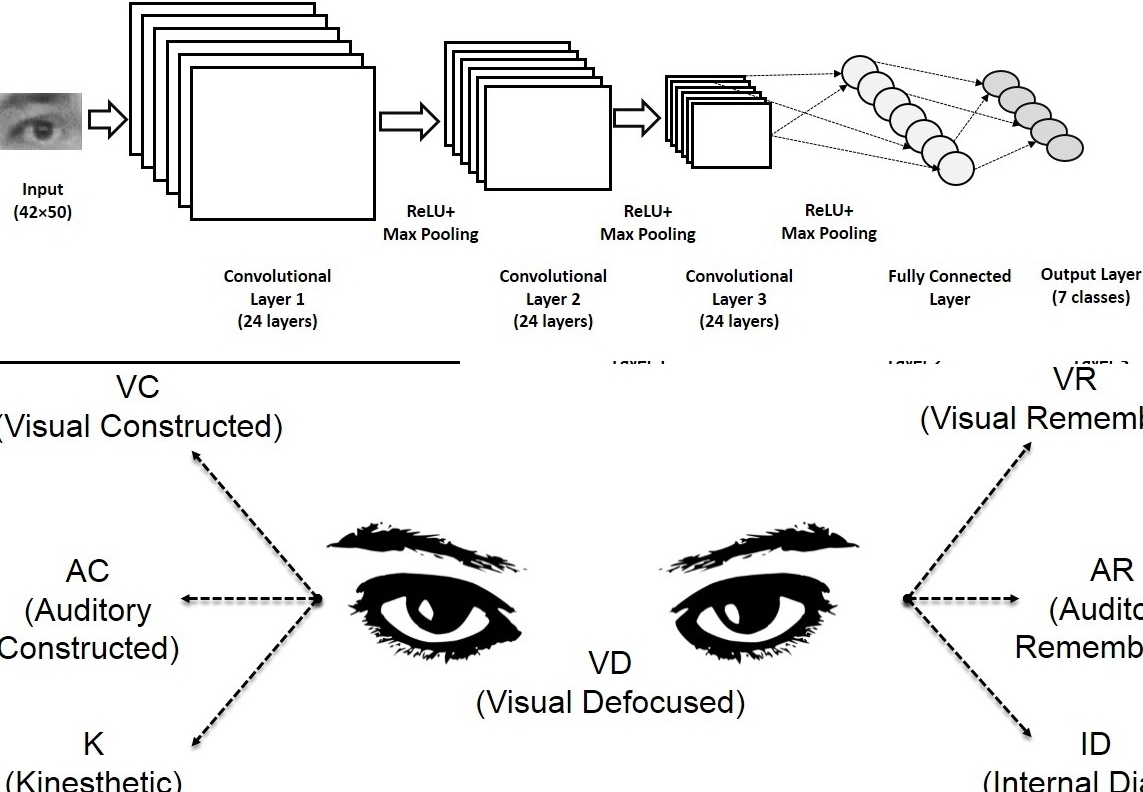 Estimation eye gaze direction is useful in various human-computer interaction tasks. Knowledge of gaze direction can give valuable information regarding users point of attention. Certain patterns of eye movements known as eye accessing cues are reported to be related to the cognitive processes in the human brain. We propose a real-time framework for the classification of eye gaze direction and estimation of eye accessing cues. In the first stage, the algorithm detects faces using a modified version of the Viola-Jones algorithm. A rough eye region is obtained using geometric relations and facial landmarks. The eye region obtained is used in the subsequent stage to classify the eye gaze direction. A convolutional neural network is employed in this work for the classification of eye gaze direction. The proposed algorithm was tested on Eye Chimera database and found to outperform state of the art methods. The computational complexity of the algorithm is very less in the testing phase. The algorithm achieved an average frame rate of 24 fps in the desktop environment.

Eye movements contain abundant information about cognitive brain functions, neural pathways, etc. In our approach, eye movement data is classified into fixations and saccades. Features extracted from fixations and saccades are used in a machine learning framework for biometric authentication. A score fusion approach is adopted to classify the data in the output layer. In the evaluation stage, the algorithm has been tested using two types of stimuli: random dot following on a screen and text reading. The results indicate the strength of eye movement pattern as a biometric modality. The algorithm has been evaluated on BioEye 2015 database and found to outperform all the other methods. Eye movements are generated by a complex oculomotor plant which is very hard to spoof by mechanical replicas. Use of eye movement dynamics along with iris recognition technology may lead to a robust counterfeit-resistant person identification system. 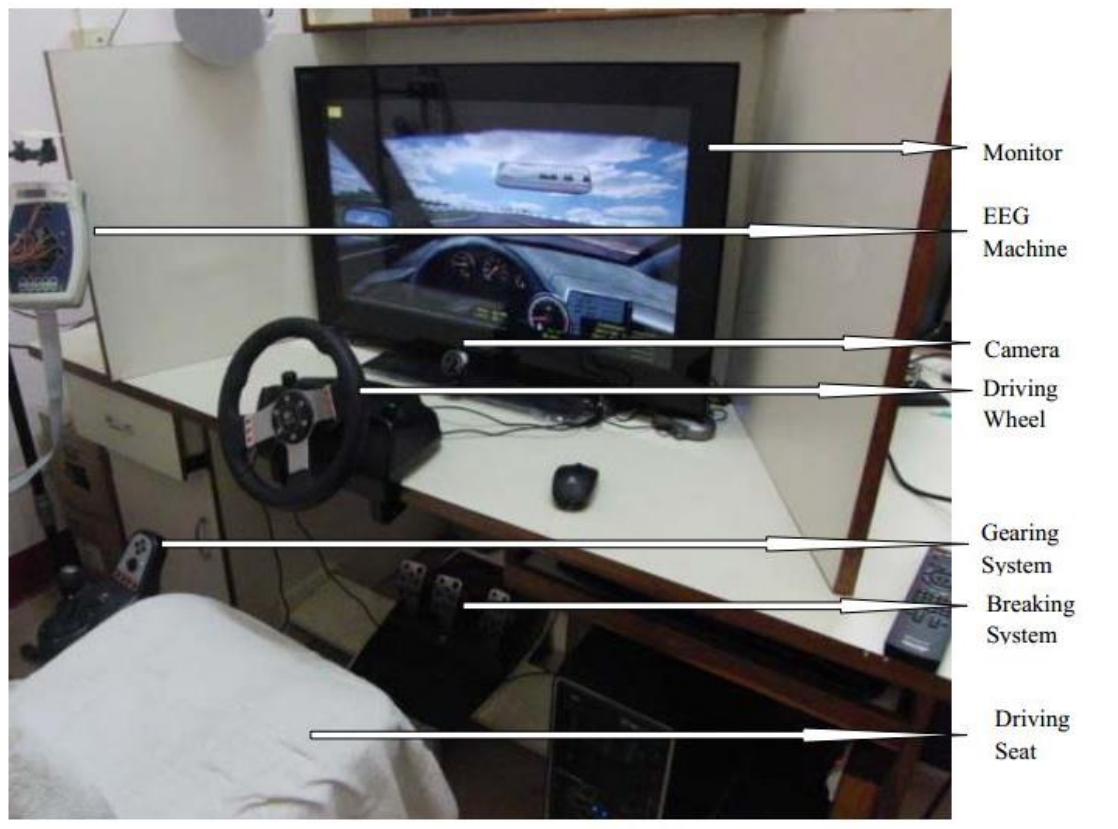 On board monitoring of the alertness level of an automotive driver has been a challenging research in transportation safety and management. In this paper, we propose a robust real time embedded platform to monitor the loss of attention of the driver during day as well as night driving conditions. The PERcentage of eye CLOSure (PERCLOS) has been used as the indicator of the alertness level. The algorithm has been cross validated using brain signals and finally been implemented on a Single Board Computer (SBC). The system is found to be robust under actual driving conditions.

Facial expression analysis is one of the popular fields of research in human computer interaction (HCI). It has several applications in next generation user interfaces, human emotion analysis, behavior and cognitive modeling. In this paper, a facial expression classification algorithm is proposed which uses Haar classifier for face detection purpose, Local Binary Patterns(LBP) histogram of different block sizes of a face image as feature vectors and classifies various facial expressions using Principal Component Analysis (PCA). The algorithm is implemented in real time for expression classification since the computational complexity of the algorithm is small. A customizable approach is proposed for facial expression analysis, since the various expressions and intensity of expressions vary from person to person. The system uses grayscale frontal face images of a person to classify six basic emotions namely happiness, sadness, disgust, fear, surprise and anger. 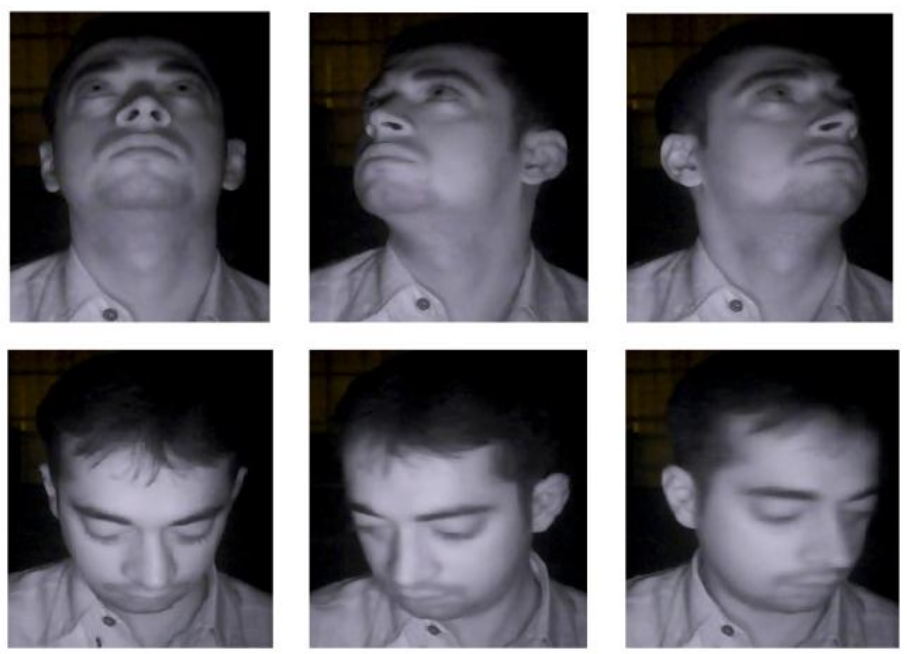 Human Computer Interaction (HCI) is an evolving area of research for coherent communication between computers and human beings. Some of the important applications of HCI as reported in literature are face detection, face pose estimation, face tracking and eye gaze estimation. Development of algorithms for these applications is an active field of research. However, availability of standard database to validate such algorithms is insufficient. This paper discusses the creation of such a database created under Near Infra-Red (NIR) illumination. NIR illumination has gained its popularity for night mode applications since prolonged exposure to Infra-Red (IR) lighting may lead to many health issues. The database contains NIR videos of 60 subjects in different head orientations and with different facial expressions, facial occlusions and illumination variation. This new database can be a very valuable resource for development and evaluation of algorithms on face detection, eye detection, head tracking, eye gaze tracking etc. in NIR lighting. 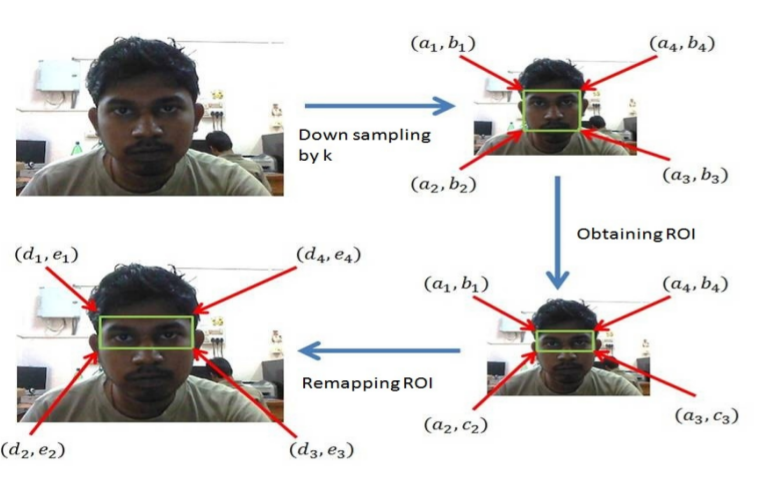 A Framework for Fast Face and Eye Detection

Face detection is an essential step in many computer vision applications like surveillance, tracking, medical analysis, facial expression analysis etc. Several approaches have been made in the direction of face detection. Among them, Haar-like features based method is a robust method. In spite of the robustness, Haar - like features work with some limitations. However, with some simple modifications in the algorithm, its performance can be made faster and more robust. The present work refers to the increase in speed of operation of the original algorithm by down sampling the frames and its analysis with different scale factors. It also discusses the detection of tilted faces using an affine transformation of the input image.